A Clear View of Sales 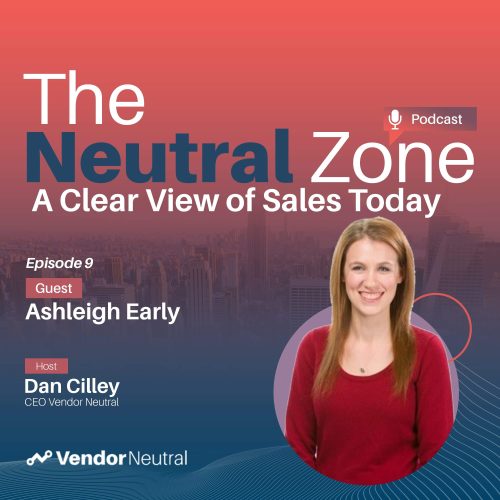 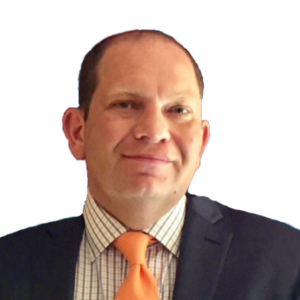 A Clear View of Sales with Ashleigh Early: A Tale of Two Reps

Co-Host The Other Side of Sales

Listen as Dan Ciiley, CEO of Vendor Neutral, talks with Ashleigh Early, who provides invaluable insights into the world of sales technology and sales today. She shares a tale of two technology sales reps and the difference they made when it came to buying sales technology.

Dan Cilley Hi, this is Dan Cilley with Vendor Neutral, and we’re really excited today to have Ashleigh Early with Ashleigh Early, L.L.C. Thanks, Ashleigh, for joining us.

Ashleigh Early Thanks for having me.

Dan Cilley No problem. Well, Ashley is joining us today as part of the Vendor Neutral Zone podcast series, again, about the good and bad, about buying sales technology. An Ashleigh’s got some really cool stories to tell as she’s had some experience in both the buying and acquisition of sales technology and also has been on the other side of the table in the acquiring of sales technology for her organization. So what do you have to say, Ashley?

Ashleigh Early, So I think probably my favorite recent story is I’ll call it kind of a tale of two sales reps, and basically, I went through a buying cycle with one of my consulting clients, and they were looking for sales engagement technology. And they’re going through the process of evaluating all the vendors, and there is this one vendor, and I’m going to keep the name confidential. But there is this one vendor, one particular sales rep who, from the moment we engage with this particular sales rep, could not go more than twenty-four hours without checking in with my client. Whether it was email, whether it was phone, and usually what would happen was it would start with an email in the morning, and then if you didn’t respond to the email by lunch, he would start getting text messages, and then if he didn’t respond to the text messages by about one or two, then he would start getting phone calls. We actually tried this once and with a full day. I think he had a total of 10 attempts on this guy between phone and email. And this went on for about a month, despite reaching back out and saying, hey, nothing’s changed since yesterday. You have to give us a week. No, seriously, a week. Please leave us alone for a week. And it got it was very, very strange. So we eventually finally got this guy to actually give us a week because we were doing a bake-off between two competitive technologies. So we’re like we told you last week. We’re doing the competitive technology this week. Give us a week. So that all goes by and we decide, you know what, we’re going to go with this other vendor. So Vendor A is the one who’s really engaged with us, is very excited. And I should be clear; this is a small deal for this vendor. This is three, four seats, not a big team, not a big deal. So it’s like, OK, maybe if it’s a multi-million dollar deal, I can see being a little more something. But it was it’s a very strange vibe. It really pissed off my client, and it pissed him off to the point where I’m actually having to do some selling for this sales rep to say like, no, no, no, this is not the technology. This is the rep. The technology is not doing this. And I can tell because of phone numbers and stuff like that like he’s calling from his cell every time. This is not the tech. This is not what your team is going to be doing. Your team is not going to be stalking like you’re being stalked. So we finally tell this guy, you know, we’re going in this other direction, and we’re going in this other direction because there were key features that they didn’t have. OK, so it’s hey, we like your technology. We agree that you’re better at these three things, but we need these three additional things, which you can’t do. Sorry, we’re going in another direction. I actually took the email that they sent back and put it into a word processor. Forty-two hundred words.

Ashleigh Early Forty- two hundred word essay about all the reasons why it’s a mistake, and he would feel terrible if we were sacrificing our business by partnering with this other company who is just inferior in every single way. And look at all of these hyperlinks and all the data behind it. And it honestly appears to be up to him. Actually, I was like, whoa, this is just this is too much. Stalking is one thing; writing a book, a small e-book, and sending it to the client is a whole other thing.

Dan Cilley Absolutely that comes down to training and development, you know, it really does come down to developing that rep effectively and efficiently and, you know, upskilling them along the way. It doesn’t sound like that that rep has the skills. It sounds like they’ve been kind of thrown into the fire a little bit. So tell me what good looks like. That’s what I’d like to hear.

Ashleigh Early Like I said, this is a tale of two reps. So this is where it gets kind of interesting. So I took that, and I got pissed off. At this point, I know leadership in a lot of different sales, technology companies. I took the email, and I and I did exactly that. I was like, hey; this rep is struggling. This is a cry for help. Please help this rep, the deal’s dead, but help the rep. In the process, and this is where it gets good, in the process of getting this rep help, the manager steps in, rep still on the call. The rep is apparently under strict instructions to stay silent, which he couldn’t do. And they kind of restarted the process like, hey, we just want to decompress. We understand you had a terrible experience. We want to understand what happened so we can coach and we can grow. So exactly that. So we got to call my client, myself, the manager, and the sales rep. And we go through this process, and we’re just you know, it’s very positive. The rep still doesn’t quite get it, still is struggling, but it’s OK. I know they’re going to get it afterwards, and this manager asks a very important question, kind of dives right back into the core of the issues, like, OK, you’re going with the other vendor because they have these three features. Are you aware we are partnered with another company that can offer you those features? No, we weren’t aware. Oh, hang on a sec, let me go get you some information on that. We don’t do this very often. It’s not in our wheelhouse, but yada, yada. I should also mention this point; we are three days from the end of the quarter. So, of course, end of quarter fire sale comes in. But it was that extra second of this guy coming in, and he was able to do all the right things, listened, acknowledged, offered some alternatives, but in a way that wasn’t; You have to go with us. You’re ruining your business. It was, hey, are you aware? I wasn’t, and like I said, I know leadership at this company, so I had no clue they were offering this new set of things. I was like, oh, this is great for me to know for my other clients as well. But took the time, gave us the proposal, negotiated with us a little bit, and it was, what stuck with me about this was it was a great example of, like I said, tale of two reps, the rep that was no clue what they were doing is just trying to do the same message over and over again, and it’s just not working. If I was pissing people off and someone else who comes in afterwards, owns, doesn’t, you know, say, oh, it’s his fault, we’re firing him. He says, no, we’re going to teach him and let me show him how it’s done by asking you just a couple of quick questions that maybe got missed early on, turned into a deal. They got the business, but they got it because they took that time to go back and say, yup, we screwed up. We’re trying to help this guy, and can we start again a little bit? But because you’ve already done the bake-off and everything, that was all that was needed.

Dan Cilley Are you still working with that rep?

Ashleigh Early I am still working with that manager.

Dan Cilley So working with that manager, the person…

Ashleigh Early Still working with the manager. Yeah. He’s actually become somebody who I’m checking in with quasi regularly just because it’s been delightful. It’s, and one of my favorite things about being in sales and working with a sales technology company is.

Ashleigh Early And I’m very aware that the kind of the irony of the white girl saying this, but game respect game, man, I love being on calls, and I see someone just nailing every step of the discovery and hitting every objection with the right twist. It’s just to sit back, and you’re like, oh, this is muh, thank you.

Dan Cilley It really is. And again, you can call out that person’s name. I’d love to share socially somebody who does a job so well.

Ashleigh Early I’ve got I’ve got a bunch of people I can call. They’re doing it great. I’m like I said, just for the sake of the relations I’ve got with these vendors, I’m not going to call out any specific teams.

Dan Cilley No worries, it’s just I love to give credit where credit’s due. Sometimes.

Dan Cilley So few have that opportunity. But, I get it totally understand, especially if you’re working with so many different solutions.

Ashleigh Early Well, you know what? I’ll say this. When we released this podcast, when we release this, if you’re looking at this, please come hit me up on LinkedIn. When this is live, I’ll post five sales professionals that are doing it great, and you should definitely be connecting with that are just absolutely there. A little bit quiet on social media, but they are true practitioners who take pride in their craft.