It’s actually really hard to go out and buy new software right now. Even when a company is up 300% in revenue or “crisis-resistant,” their CXOs and Board will tell me, “We are frozen on headcount. We are in ‘wait-and-see mode’ on investing in new technology.” Even, “We are pairing back the stack and seeking to consolidate.”

The good news is that you can align with any of these motions as you look to improve your rev tech and sales tech initiatives. If it’s a consolidation play to lower the total cost of ownership (TCO), first calculate your cost per head. Let’s say, all-in, you’re spending $500/rep/mo on the sales or marketing stack. To reduce this, start bringing that problem to sets of vendors and looking for converged stacks – could have a dialer, and revenue intelligence, and email touch pattern sequencer.

If the leadership is OK with the investment into more tech – in hyper-growth mode still – perhaps the issue is the ROI on the existing stack. Are there single point solution vendors that are dead weight? The ROI is unclear. You need to, in essence, audit your stack. Maybe the solution you need to add to this is API glue to get the systems to talk together better – which will kick off more revenue. Perhaps it’s a missing element like Gong, Chorus, or ExecVision to effectively listen and analyze calls – let’s see why the top 2 performers are performing the best.

I interviewed Sarah Brazier at Gong on my podcast and was struck by her approach to analyze the objection handling (rebuttals) of other top performers and the stronger verbiage alone even with variegated tone outperformed. Maybe it’s an example of a use case like this that will get your CRO, VP Sales, and head of Enablement pumped to try this tech in your stack, especially now that we’re all mostly remote.

You must build a compelling ROI business case and work with your vendors to map out how different value adds have happened in similar verticals. Overcoming hurdles comes down to dollars and sense (pun intended!) It’s pretty hard for an IT leader to block you if the tech is sound, and the business case passes muster.

Building coaches and champions inside organizations is the stuff of legend and entire systems like Miller Heiman are built on this. In simplicity, you want to look for high TQ or Technology Quotient folks within the power base of stakeholders who believe in the promise of tech and have proven it out either in their organization or others like it. Locate the champions, the enthusiastic but those with clout and purchasing power. Oftentimes a P&L holder will rubber-stamp a champion who is a situational champion because they have tech stack or rev stack knowledge. It’s critical to keep feedback loops with both. Of course, the high TQ folks are pumped but get to know the non-technical folks who might not quite understand this tech. This is like doing a deal inside one’s own organization.

When you mobilize an internal consensus they’ll often trigger an RFP/RFI and that’s not necessarily bad because you can let the vendors have a bake-off and the best point solution or converged stack will win.

Challenger Customer is a great book about building consensus. One of the issues is core team dysfunction. If too many people get too fired up about their position you actually just create internal gridlock. I’d interview your colleagues and management separately and together and create a document that stack ranks the importance of the various features, like a scoring and grading chart – could be a simple excel chart. Then from there weigh out the positives and negatives of the new stack.

"Homebrew systems are easy to keep around. Change is hard. Build your business case with the right brain and left brain reasons: make money, save money, consolidate, reduce risk, increase security, and privacy. "

Another smart move is to hire a RevOps or Operations Consultant to analyze your stack and look for efficiencies in adding point solutions or converged systems, even migrating off various solutions or building the API glue / API calls so the systems talk. Zapier, Tray, Syncari, and If This Than That (IFTT) all solve these problems in various ways. You still need cycles for a Sales Ops Admin, either your internal Sales Operations, Marketing Operations, Revenue Operations (RevOps) to help you dial this in and actually bring the workflows to life, testing that the right signals fire.

By and large, you’re going to be dealing with the status quo aka “do nothing.” Homebrew systems are easy to keep around. Change is hard. Build your business case with the right brain and left brain reasons: make money, save money, consolidate, reduce risk, increase security, and privacy. Drive a story of transformation at a similar venture throughout your team. Get your CTO, CIO, CXOs, and all the folks who are impacted by the solution (or lack thereof) onboard. Run a mini-campaign and hold a bake-off. It’s likely even attempting this journey will get the dominoes to tip internally and your management may just let you go for it.

Remember. almost all point solutions, data providers, and SaaS widgets are sold on trials, free and paid. Roll out a tech stack for a week, test the data against existing and other data sets, put your reps on the recording tool, managers listen in. Run it in flight simulator mode, in a sandbox, on some target accounts that are less risky. AB test it and make sure the trial period is long enough to provide statistically significant data. When testing a tool like Sales Navigator, you could tag all the leads and opportunities brought in within that period as “Nav.” Then within a few weeks, months, or a quarter you can attribute the percentage of the pipeline and even closed-won revenue that was influenced by LinkedIn’s B2B Sales solution.

“What gets measured, gets managed” the late, great Peter F. Drucker used to say. Selection by committee is often dangerous so pick the group that will make the transition the smoothest. Lean in on the case studies from similar companies with your peers. Lean in on the ROI business case, payback period, and upside when negotiating the deal. Collaborate with vendors on this. This is your CFO’s love language when 6 months later they look back on their multi-tens of thousand dollar SaaS bill and instead of scratching their head, they pay the invoice with gusto. 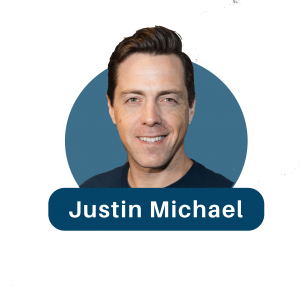 Justin Michael, aka the Tony Stark of XDRs

is Vendor Neutral’s Futurist and author of “Tech-Powered Sales” releasing on HarperCollins in 2021. After two decades of consulting 100+ early-stage startups on hypergrowth and holding leadership roles at LinkedIn, Salesforce, and reporting to Sean Parker, Justin was part of a stealth project where engineers built an AI model of his brain while prospecting with the goal of fully automating sales development itself. He is passionate about AI, ML, NLP, Deep Learning AI, and Neural Network evolution in order to bridge toward the Singularity. His writing seeks to unlock all the ways Marketing and Sales leaders can apply these mechanics to free up the human in the sales process, restoring quality consultative exchanges that drive value.